iMAN i3 Wireless Charging Rugged Smartphone has a Quad Core CPU, IP68 Waterproof Rating, 13MP Rear Camera, 1GB RAM, 16GB ROM and even Smart-Touch to really show how diverse and practical a communication device can be. 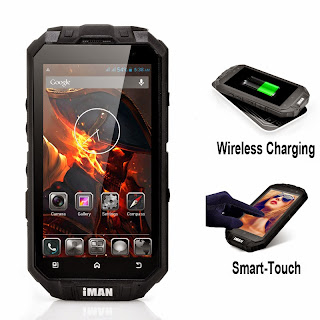 Expires on : Limited Time
iMAN i3 Wireless Charging Rugged Smartphone has a Quad Core CPU, IP68 Waterproof Rating, 13MP Rear Camera, 1GB RAM, 16GB ROM and even Smart-Touch to really show how diverse and practical a communication device can be.

Here is one the latest rugged phones to enter Chinavasion, this is the iMAN i3, which is a seriously tough phone that comes ready for action. Loaded with an Android 4.2 operating system, the user can create a user environment that suits them plus with access to the online Google Play store, they can download and install all the apps they need. Don’t settle for anything less as this rugged Android phone has a MTK6589T quad core processor and 1GB of RAM, which results in a fast and effective response time when dealing with multiple applications.

Whether you are climbing the highest mountains in the East or the darkest rivers of the West, the iMAN i3 quad core phone can survive the trip. Having an IP68 waterproof rating indicates that it is virtually protected from the ingress of water plus being dust proof also means no particles such as sand will enter. Plus don’t fear taking a few knocks as the tough exterior can stand its ground and protect the intelligent interior that this smartphone has. Unlike most rugged phones, the iMAN i3 has a slim design so not only will it be protected against water, dust and any knocks but also it will actually fit into your pocket comfortably.

Capture what you see as it happens with the 13 megapixel camera that is built-in to the rear of this quad core android phone. Once you have got the image you want then you can save it onto the 16GB of internal memory or on to a micro SD card of up to 32GB.

When it gets cold outside and you need to keep your hands warm you can still use this phone as it has a smart-touch feature meaning you can still select on the screen when wearing gloves even though the iMAN i3 has a capacitive display.

Now another cool feature is that this phone can wireless charge via the including charging dock so no need to find the connection port, just simply plug in the charging dock and rest this magnificently designed phone on top for instant charging.